5 Cheap, family-friendly dinners you can make in a flash

How many times have you been running late and realize you didn’t plan anything for dinner that night? We’ve all been there. But before you break down and roll through a drive through or order a pizza that isn’t in your monthly budget, check this list of simple, fast dinners that are not only easy on your wallet but are kid-approved. Each one clocks in at less than $5 to feed our family of four.

Keep a jar of healthy spaghetti sauce on hand. I can usually score one for $1.25 or less when they’re on sale, and I pick up two or three to stash in the pantry. Store brand spaghetti noodles frequently go on sale for less than 80 cents. Your noodles can be ready in less than 20 minutes, and you can cut some veggies or throw a salad together while they cook. My kids didn’t complain when their toasty garlic bread was made with sandwich bread the time or two when we didn’t have rolls or French bread on hand, either. We use half of a jar of sauce (about 65 cents) and about half the box of spaghetti noodles (um, 45 cents!). Toss in a salad, some parmesan and a couple of slices of bread per person, and that adds maybe $2. This dinner for a family of 4-6 people can be had in less than 20 minutes and will run you less than $3 for everyone.

My kids love tacos! I buy ground beef on sale at the grocery store or in a big pack at Costco, then I use my kitchen scale to separate it into one pound portions and wrap and freeze them for later use. One pound feeds my family of four, but if you have a larger family (or one or more teenage boys), you might need a little more than a pound. Take one package from the freezer and thaw it out in your microwave, and about 10 minutes after it hits your skillet, you’re filling tortillas. I know it’s not the healthiest way to make tacos, but I do season the meat with premade taco mix that I buy at Costco. With cheese, lettuce, tomatoes, sour cream and salsa, this still clocks in at about $4.50 for all of us. I’d spend more than that for one person for drive-through tacos!

I can think of four variations of breakfast for dinner off hand, so I kind of feel like I get extra credit for just listing this as one item. J You can crank out a while slew of pancakes or waffles in a flash (bonus to your budget when they’re from scratch), French toast, or eggs and toast. Veggies feel a little odd when you’re having a sweeter breakfast like pancakes or waffles, so I suggest substituting fruit for the dinner vegetable. If there’s syrup on the table, the kids will learn quickly not to ask if there’s dessert. A dozen eggs come in at less than $1.50 in our area, I don’t pay more than $1 for a whole loaf of bread, and it’s pennies for each of the baking ingredients that would go into pancakes or waffles. For a family of four, including fruit for the side, breakfast for dinner will total about two or three bucks.

Have you ever made refried beans in your slow cooker? They taste amazing, it makes a ton, and it’s a great way to use a bag of dried beans. I did this using a recipe I found on the Six Sisters’ Stuff blog, and had enough at the end to fill two quart-sized freezer bags with about two cups of beans each. You can mash them or keep them whole when you freeze them, whichever you prefer. (I still had enough for a third bag, but I added a little more liquid and some salsa and turned it into bean dip that we all but inhaled right away.) Whether you make your own refried beans or you start with a can, bean and cheese burritos, or cheese quesadillas, come together quickly and for very little cash. Serve up some cut veggies on the side, and you’ve got a healthy dinner for a few dollars.

There are many ways you can toss stir fry together, which gives you a ton of flexibility in what you choose to put in it. One of my go-to meat preparations is “Korean Beef” from the Six Sisters’ Stuff recipes. Start your rice on the stove or the rice cooker, and by the time it’s done, this tasty ground beef dish is done. A bag of frozen stir fry vegetables is $1 or less on sale, and they steam up fast – or you can just cut up some fresh veggies and place them in the middle of the table. You can get by with less meat when it’s mixed in with noodles and lots of vegetables, too – three cut up chicken thighs, about ⅓ of a head of cabbage, a bell pepper and some mushrooms work well with store-bought lo mein noodles. Both of those options come in at around $4 for my family of four.

It’s easier than you think to stay out of the drive through, which is a key step in getting your finances under control. Keep these ideas in your back pocket, and even if you’re running late, as long as you have some key ingredients in your fridge, pantry or freezer, you’ll have a nutritious, filling dinner on the table with little effort and expense. 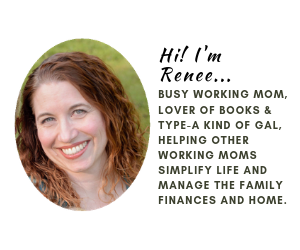